Among “Christian America,” a person’s understanding of who God is, in particular, but also what salvation is influences the way s/he views and interacts with the world and its diversity of peoples, cultures, and ideologies.

How we see and treat people distinctly different from ourselves is (largely) a result of our understanding of God, and whether or not we see “the others” as equally favored and forgiven by God.

Corroborating my assertion is a 2011 national survey, “The Values and Beliefs of The American Public,” which concluded that “four gods” dominate North Americans’ consciousness, namely: authoritarian, benevolent, critical, and distant. A co-author, Paul Froese, stated, “If I know your image of God, I can tell all kinds of things about you. It’s a central part of worldview and it’s linked to how you think about the world in general.”

It’s a no-brainer, I think, to state that where collective consciousness (or unconsciousness) of an authoritarian, critical, ever-vigilant, and prone-to-punish personage predominates – human or divine – there, too, resides a pervasive and underlying fear and insecurity, which often results in a 24/7 self-comparative (and End Time) mindset, lest one somehow be disqualified and Left Behind.

For example, “Sinners in the Hands of An Angry God” is both early 1700’s sermon title, as well as sociological footnote on America’s past.

While God is probably slightly less angry than he was 300 years ago, I believe perceiving people first and foremost as “lost” (particularly Muslims, Hindus and Buddhists who predominate in the so-called and least “Christianized” 10/40 Window), and God as residing in a sterile, sin-free holy of holies somewhere in the heavens, and whose “righteous anger” needs satiating, is still a widely held belief of “Christian America’s” view of God, and correspondingly of “the different others'” fiery eternal future.

Rabbi David Hartmann aptly observed of America’s religious consciousness, “The longing to be eternally redeemed can become so profound that you doubt whether your way will take you there if you see another person enjoying his or her different way.”

My early faith story as example . . .

I grew up Southern Baptist, which if you don’t know anything about is the largest (conservative) Protestant/evangelical group in North American. “Salvation” lingo was as common as talking sports. During my 3rd grade, I recall my dad entering my room one evening, sitting on the floor alongside me, and after asking me a few “eternal type” questions, me soberly confessing both my sins and inherent sinfulness, praying the “sinner’s prayer,” culminating with asking God “in Jesus” to come live in my heart.

Salvation as I, and many of you experienced it, is like a peddled (spiritual) product, which aspiring saints procure using a Christian multi-step formula (usually it’s referred to as the “Four Steps to Salvation“): confess, believe, repent, accept.

We are assured that our profession and prayer of the 4-steps will appease/satisfy God’s righteous anger against both our past sinful acts, as well as our inherent sinful nature, and that He will reward us by forgiving our sins and allowing us access to heaven.

I see at least three problems with this view.

One, it assumes, based on a selective choice and interpretation of scriptural texts – and corresponding exclusion of dissonant ones – that the “salvation formula” is an absolute and “biblical” mandate from God; one uninfluenced by culture or socio-economic/sociopolitical history. John 14:6 and Acts 4:12 are prime examples of texts frequently wrenched from their social contexts and used in evangelistic and mission “campaigns.”

Thirdly, it’s exclusionary, thereby creating scores of “Jesus (only) Camp” communities, and disregarding completely God’s concern and love for all humanity (and creation).

Through sharing life experiences with the cultural and religious “different other,” salvation became more a discovery of an abundant (and balanced) wholeness of life (John 10:10), as I sought and found the image of God in “the other.”

As Samir Selmanovic confirms, “We have saturated our religions with our own selves, and the most direct way to enter a new whirlwind of fresh and substantive religious experience is to seek and find the image of God in those who are not in our image.”

Salvation comes with the responsibility to love God whole heartedly, but as importantly to love neighbor as self, extending hospitality and respect to strangers, and avoid bearing false witness against the “different other.”

Salvation is not merely or even mostly some pie in the sky, as I was raised to think, which we acquire and partially experience in this life, but fully experience in the next. Therefore, salvation/life isn’t really all about me, but about “us.” To the extent that a majority of the world’s people still live in abject poverty and suffer unspeakable injustices, to that extent “my” salvation is incomplete and partial.

As Selmanovic again aptly remarks, “So much of who we all are depends on maintaining a polarized and conflicted world.  To challenge this state of affairs by finding God in the other not only disrupts our communal sense of identity but also alters our social and economic structures on every level, from our families to our nations.  In some twisted way, we have learned to benefit from the misery of the divided world we have created.  Now we have to unlearn what we think we know and then learn to embrace this newfound reality of our globally intertwined community.”

Like former 19th century Bishop to Natal/South Africa, John W. Colenso, I discovered via postgraduate studies that “all human affections have a religious character.” Among the many interfaith people with whom I have been fortunate to share studies and life, I discovered a common and shared humanity inclusive of varied yet shared affections, in which they, like me and my “kind,” were trying to find meaning and give expression to the inexplicable in life such as birth, suffering and death.

Salvation, then, through my experiencing God in and through “the other,” has thankfully become unshackled from an exclusionary 4-step process, in which in order for me to feel saved for eternity, other people have of corresponding necessity to be damned for eternity.

Regarding this tenacious Protestant/evangelical “Pharisaical mindset,” which takes pleasure in quick-step solutions to life and living, like “The Four Steps to Becoming a Christian,” Colenso stated that they (American missionaries in SE Africa) ask these type questions “not because they are impelled to it by that human love which fills the breast, and makes us hope, that, if possible, all may be saved at last, but from a desire to find a clear warrant in the doings of the invisible world for that system of exclusiveness, which they have begun to practise here on earth.”

For about 20 years, my primary and controlling image of God might be likened to a tightrope. I was the tightrope walker, who daily and precariously traversed life’s landscape solo, clinging to my balancing pole, always looking directly ahead to what I was absolutely certain the Bible informed me about the future of the world and of “non-believers,” always looking down at, but never into the faces of the billions of people whose existence and life didn’t measure up to my socio-economic status or Christian beliefs, mindful that a misstep of my own (adultery, lust, etc.) could jeopardize my secure standing with God.

It wasn’t until postgraduate studies that I was forced (by assignments) to risk my faith, as it were, and engage cultural and religious difference first-hand.

Despite frequent discomfort at experiencing life from “the others'” perspective and narrative, only then did I become aware of and personally experience an alternate, life-affirming, yet feminine controlling image of God – that of a mother with her infant securely wrapped/strapped to her back. 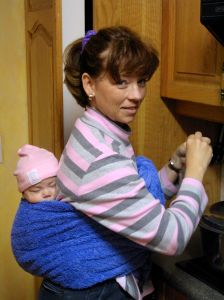 My wife with one of our children.

A mother’s love is all-embracing, all-accepting, all-loving, and all-forgiving. I can think of no greater, more cozy cocoon in which to discover and come to terms with life’s struggles and self’s identity, than this. After discovering that you are first and foremost an individual of immense and divine creative value – and not first and foremost a sinner – you’ll experience the freedom to engage life alongside the scores of “different others” to mend and heal a fractured world.